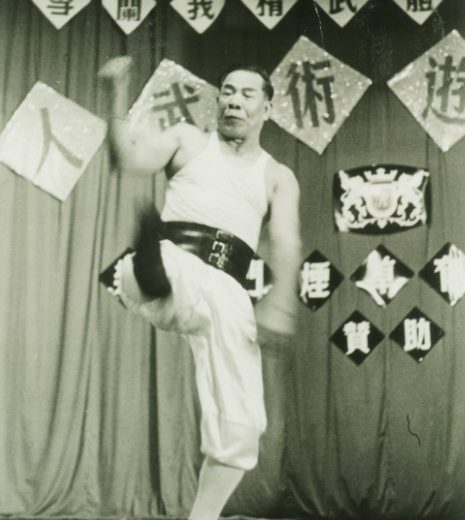 During the 1930’s while China was at war with the invading Japanese army, local military officers organised guerrilla fighters of their district into the 19th Route army led by Zau Hon Leng of SunHui. Sifu Chan was soon appointed as the Broad Sword combat instructor, leading raids into enemy camps.

When peace was declared in 1946 Sifu Chan returned to teaching his academies where he had been appointed, now, as chief instructor. Later the same year, the Jin Wu Koon establishment was officially registered with the Canton local authorities at Jian Men.

After the Communists liberated China, Grand Master Chan Keng Wan went to Hong Kong where he established the Keng Wang Gymnasium and Die Da Medical Clinic for the treatment of bone injuries. The Grand Master taught his son, Chan Cheuk Ming these secret techniques. Whilst living in Hong Kong, Chan Keng Wan accepted the position of voluntary Die Da Medical Consultant for Hong Kong’s largest football association. He also accepted the position of voluntary doctor at the headquarters for Hong Kong’s Department of Health and Hygiene.

Grand Master Chan was invited to welcome the noble emissary, Prince Phillip, to Hong Kong in 1959. All his disciples joined in the formal demonstrations to commemorate the occasion.

In 1967 Grand Master Chan was employed by the Malaysian Karate Budokan Headquarters as medical advisor, and as instructor for the Chinese style of Double Dragon Pole, Broadsword, and Spear. As Master of the Buda Fist style, he often travelled back to Hong Kong to give public demonstrations of his unique Double Dragon Fists which were considered to be the best even amongst Kung Fu Masters.

Today Grand Master Keng Wan’s youngest son Sifu Chan Cheuk Fai continues his father’s tradition in the city area of Sydney where he has established the Jin Wu Koon Australia Headquarters. His skills and credibility as a martial artist are widely recognised and respected throughout Australia. Jin Wu Koon now has full-time training academies at Kingsford, in Sydney’s Eastern Suburbs and now in the Southern Sydney Suburb of Sutherland.

Far from the original training centres of China, the style, International Jin Wu Koon, is still trained with its stringent requirements and traditional techniques.

Dive straight into the feedback!Login below and you can start commenting using your own user instantly